Whether or not you’re a hipster, you’ve probably heard of Robert M. Pirsig’s bestseller Zen and the Art Motorcycle Maintenance. It’s a story about a father and son who take a motorcycle trip across America, discussing deep philosophical issues en route. The savvy reader may probably pick up a few life lessons that would otherwise have to be laboriously gleaned through the existential crises of quarter and mid-life.

The tome teaches us one lesson, however, not bound within its pages. Pirsig’s manuscript was allegedly rejected 121 times before finally being accepted by a publisher. Even the child who went through the Russian education system with the name “Fuckov,” would admit that it takes incredible strength of character to be told to “Fuck off” 121 times, and come back for more. Yet, the 122nd publisher accepted the manuscript and the book subsequently sold over 5 million copies.

The moral of this story is obvious, packaged neatly into a proverb:

If you try hard, you will eventually get to the top. Perseverance portends publication. But this is not the only professional domain in which to exercise such a heuristic for success. Keep playing football; you’ll become a Premiership football player. Keep selling cocaine on street corners and you’ll eventually rise to become the next Pablo Escobar.

Yet, as author of Freakonomics Steven Levitt asks, “Why do (so many) drug dealers still live with their moms?” The answer is simple. The spaces at the top are sparse, and the competition is fierce. Levitt goes on to explain, “The problem with crack dealing is the same as in every other glamour profession: a lot of people are competing for a very few prizes.”

So, for the majority of people, no matter how hard they try, they’ll never get to the top. Then why do they persist so doggedly? Surely they are nothing but lowly dogs, futilely chasing their tails, incessantly muttering “One day” to themselves like Annyong Bluth of Arrested Development?

Perhaps their efforts are symptomatic of the capitalist fantasy nasogastrically force-fed to us by a government drunk on neoliberalism, and perpetuated by the media and shows such as The X Factor where bell-ends may become leg-ends. Anybody can win, and if you don’t it’s because you’re lazy. Understandably, people chasing these so-called glamour professions become blind to the mountain of sheer numerical inopportunity that militates against them.

As Robert Pirsig will no doubt confirm, publishing is one of these glamour professions. For every successful book, there are hundreds and thousands of rejection letters or emails. Now, herein lies the tenuous link: I wonder if dating, at least online dating, is similar to publishing?

Publishers are approached and propositioned by writers seeking book deals. There are plenty of publishers around, but a single publisher is probably approached by several writers. Switch back to dating and the OKCupid statistics bear this out: two-thirds of men message the most attractive one third of women. A women ranked highly in attractiveness will get 28 times as many messages as a woman ranked low in attractiveness. 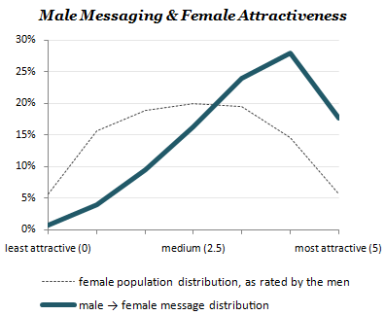 Source: OKCupid Trends: Men rank women’s attractiveness symmetrically (it is normally distributed), but they send a disproportionately high amount of messages to the best looking women.

Of course, the writers are of variable quality, some have abysmal scripts, others are budding James Joyce’s; most are probably pretty average. Literary talent then, or male attractiveness in the dating world, is likely to be normally distributed. Glibly, there are just as many ‘fitties’ as there are ‘mingers.’

It is also true that publishers are of differing renown, but irrespective of this, they are all discerning when choosing whom to publish. Very discerning. Dating statistics show that women rank 80% of men below average, somewhat discordant with a normal distribution that would suggest 50% are below average.

The numbers may be less daunting but nevertheless, the story sounds familiar; hoards of average and below average men are competing against the odds for a few attractive women at the top. Why? Again it is the cultural zeitgeist that sculpts a fictional world where anybody can get with anybody. Films reify fantastical notions where the socially awkward nerd gets the graceful cheerleader. Television is bursting with images of average-looking men like Andy Murray or Nicholas Sarkozy with their respective trophies. The result is that men subscribe to this fictional world, a world where looks, height and intelligence don’t matter; a world in which assortative mating for physical attractiveness (where ‘fitties’ preferentially mate with ‘fitties’) is denied.

From left to right: Fit and less fit.

These average men, just like some deluded wannabe writers, footballers or drug dealers, are suffering from what is known as the survivorship bias. Every time they see an average man with a stunning wife, they fail to see the scores of other men who asked that woman out, men who tried but failed; miserably so.

So, rather than the philosophy of Pirsig, should we instead heed Homer Simpson’s defeatist advice:

“You tried your best and you failed miserably. The lesson is, never try.”

Even Steven Levitt overtly mocks the “graying actors who wait tables in New York’ who are later than others to wise-up to the skewed odds and quit the acting game.

What about quitting the dating game? To be fair, depending on the gender ratio of the particular dating website, the numbers alone do not make the prospect of getting a girlfriend as unrealistic as publishing a bestseller. Rather than quit, it makes sense to lower my expectations. Much like the graduate with a PhD from a Russell Group University who will experience countless job rejections in the prevailing economic climate, one must psychologically prepare oneself for the tens if not hundreds of my messages that will go unanswered. Besides indicating that I’m not an Adonis (a fact that’s supremely easy to infer from years of singledom), it’s not a crippling indictment of me as a person, but more a reflection of the numbers in this system.

Moreover, in tough times, as the PhD graduate may have to accept the lowly, minimum-wage barista job at Costa Coffee, one will have to lower one’s standards. Hard to swallow? Well, to quote Goethe,

“If you’ve never eaten while crying, you don t know what life tastes like.”