“You can’t date him; he’s young enough to be your son!”

“Mate, she’s like twice your age – you’re such an OAPaedo.”

The above quotes reflect society’s age norms when it comes to dating and relationships. We generally consider it acceptable for a man to date a woman younger than himself; but, if he’s ‘too old,’ he’s dubbed a sugar daddy. Similarly, a woman with a penchant for a younger man is pejoratively termed ‘cougar’ or ‘sexual predator.’

I digress. The point is that this woman, my ex-girlfriend, felt uneasy with being older than me. My friends also mocked me for dating someone 7 years older than myself. And, let’s be honest, I also harboured a latent feeling that I was somehow subverting social norms. (Alas, by failing to have intercourse before the age of 25 years, I had already broken a norm established by 96% of the UK population.)

Society has a rather absurd insistence that we snog, marry or fail to avoid only those partners who share a similar age bracket. Such a sentiment is perhaps best expressed in the following, widely espoused formula:

To put it simply, in order to find out the youngest person you can date: halve your age, and then add seven years. Under this rule, a 40 year-old woman would be able to date a 27 year-old man, but, apparently, not a 26 year-old man. (Note that my previous relationship did not contravene this rule).

Clearly, such a strict age norm is somewhat artificial, plucked from local culture rather than biology. This is the essence of a school of thought known as social constructionism. What we consider appropriate for age or gender is mainly a product of social and cultural forces. To give an example, the fact that it is ‘normal’ for women (but not men) to wear flowery dresses is an arbitrary, social construct. Following this line of reasoning, might it just be an arbitrary, cultural creation that makes it normal for people to date members of a similar age group, but not those much younger or older?

But, how do we know whether or not something is a social construct? Nature is always there lurking in the background. It is possible, albeit extremely unlikely, that our genes determine whether or not we wear dresses. When it comes to dating, perhaps thousands of years of evolution have made it natural to only be attracted to those of a similar age? Maybe, in the interests of passing on our genes, there is some useful or adaptive function to only mating with other 27 year-olds, other 50 year-olds, or other n-year-olds?

One way to see the effect of social or cultural forces is to look at other cultures across the world. If people living in vastly different cultures all tend to have the same dating practices, then we might think that such dating practices are the result of a deeper, evolved and biologically-engrained drive. 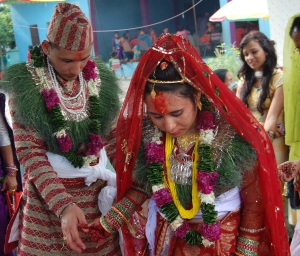 Evolutionary psychologist David Buss conducted such a cross-cultural study in 33 countries. Although the study found a common trend for men to prefer younger women (which Buss construes as an argument against social constructionism), there was large variation between cultures. Men in Zambia preferred women 7.38 years younger than themselves, whereas men in Finland preferred women only 0.38 years younger.

Also adopting a cross-cultural approach, the World Fertility Survey looked at the age differences between spouses in 28 developing countries. Analysing this data, Casterline et al (1986) found that although the majority of marriages involved a husband older than the wife, the reverse was relatively common in South East Asia (Malaysia, Thailand, Indonesia and the Philippines) and in Latin America. In Costa Rica, for example, 18% of wives were older than their husbands. The authors suggest that this may be partly due to higher educational status of women in these countries, along with greater equality within a family.

There are two salient points to such research findings. Firstly, while who we fancy is of course determined partly by genes and evolutionary drives, a lot of it is constrained by the culture and society in which we live. Dating a younger man may be stigmatised as weird in one society, but people would hardly bat their eyes in another society.

Secondly, what biology deems as ‘normal’ needn’t be the same as what society deems ‘normal.” Even though evolutionary drives may explain men’s cross-cultural tendency to marry younger women, there is no moral compulsion to follow such drives. I am innately hard-wired to eat the Mars bar in front of me, but I have the rational ability to overcome that drive. (But I’ll probably still eat it later anyway!).

Note: I also published a version of this article under a pseudonym for a dating website here: http://toyboywarehouse.com/blog/age-reason/

Note to any followers: Apologies for the delay in updating this blog. I have rejoined OKCupid in London and hopefully will actually be going on a few dates. Hopefully, my experience will be better than this guy’s: http://theunfortunatevirginmale.wordpress.com/