“I went to a shrink, to analyse my dreams
She says it’s lack of sex that’s bringing me down.”

So go the lyrics of Green Day’s hit song Basket Case. But, is there any substance to this particular psychiatrist’s analysis? Does a lack of a sex lead to depression? What about a lack of romantic relationships?

The beauty of the internet is that it provides a forum for the discussion of that which is otherwise taboo in face-to-face conversation. Haemorrhoids, persistent genital arousal disorder, perennial singledom. Discuss these within the unsympathetic real world and risk alienation; people would rather suffer in silence. It consequently becomes difficult to fathom whether there are other people suffering from the same afflictions. By contrast, discuss these, only loosely entangled in the anonymous solace of the virtual world, and people from all over emerge from their crevices with tales of similar experiences.

“34 year old male here. I have never had a girlfriend and it is eating me up inside. I am extremely lonely and I feel more and more that I will die alone.”

“Why am I having suicidal thoughts because I never had a girlfriend?”

The internet is littered with countless posts of this ilk and, contained within their melancholic words are some common themes: loneliness, depression and thoughts of suicide (suicidal ideation). The relationship between never having a romantic partner and feeling lonely is not difficult to comprehend. Neither are the associated non-pathological dips in mood. The link between prolonged girl- / boy-friendlessness, clinical depression and thoughts of taking one’s life is far more abstruse. Does said singledom trigger symptoms of Major Depressive Disorder such as anhedonia (decreased pleasure derived from previously enjoyed activities), changes in sleep and appetite, feelings of guilt, feelings of worthlessness and suicidal ideation? Perhaps such symptoms of depressive illness render victims less likely to attract a significant other. Alternatively, maybe depression and not having a romantic partner are both downstream effects of something else e.g. a physical illness or unemployment. As the now popular mantra goes: correlation is not causation.

Needless to say, a sample of mutterings from randomers on the internet, admittedly gleaned when in a personal spiral of self-pity, is hardly scientific. So, do published studies shed light on the matter?

There are studies that purport an association between early adolescent non-virginity and decreased psychological wellbeing (for example – Sabia & Rees, 2008). I will, however, be discussing the other end of the spectrum – adult or late virginity, often defined as being over 25 and not having experienced penetrative intercourse. Of course, one can still be a virgin and have had plenty of romantic partners; so the relationship between depression, suicidality and never having had a girlfriend or boyfriend is a separate question to that of virginity.

A quick search of PubMed, a database of published studies in medicine, reveals very little. Bagley and Tremblay (1997) found that gay men who were celibate were at greater risk of suicide attempts and depression than non-celibate gay men. But, as is often the case in medicine, there are studies showing the opposite. Gay men with a greater number of sexual partners may be more prone to suicide (McDaniel et al, 2001). A study by Calzeroni et al (1990) found no relationship between suicidal behaviour and celibacy in 186 patients with major affective disorders (including major depressive disorder). In sum then, there is a paucity of research out there; and, of the little evidence there is, it is hardly convincing. 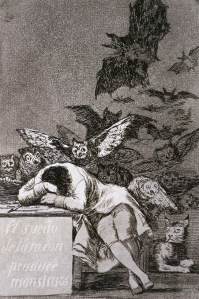 Well, apart from my own experience and those of anonymous posters on the internet, is there any other reason to think involuntarily prolonged virginity may cause suicidal ideation? Evolutionary psychology suggests there is.

Suicide presents a conundrum to evolutionary theory: kill yourself and you’ve ended all chances of reproducing. You’ve also ended all chances of helping those with whom you share genes (e.g. siblings) in passing those genes onto future generations. To adopt the scientific term, suicide does not maximise one’s inclusive fitness. De Catanzaro (1995) suggests that suicide may occur when an individual’s ability to add to his or her inclusive fitness is severely compromised. This may be due to likely poor future health, the perception of being a burden on one’s genetic relatives or, wait for it, “poor prospects for successful heterosexual mating.”

To test this hypothesis, De Catanzaro interviewed a sample of healthy subjects and those at high-risk of suicide including elderly subjects, psychiatric patients and forensic psychiatric patients, all based in Ontario. Questions about suicidal ideation were asked, as were questions about, among other things, one’s sexual history. For male subjects, lack of success in heterosexual activity was most strongly correlated with suicidal ideation. Oddly though, whether or not one had sex in the last month was more strongly correlated with suicidal ideation (coefficient = -0.67) compared to whether or not one had sex in the last year (-0.40), or sex ever (-0.45). I would have thought that being unable to have sex for longer periods would signify worse mating prospects and thus greater suicidal ideation. Nevertheless, the overall association between lack of sex and suicidal ideas still stands.

But, here comes that caveat again: correlation is not causation. De Catanzaro’s study is silent about the causal relationship between success in heterosexual activity and thoughts of taking one’s life. Suicidal ideation and whatever causes it could just as easily prevent someone from access to sexual opportunities. Indeed, as has been somewhat callously relayed to me, “girls like confidence, not emotional baggage.”

Why do we care whether virginity begets suicidality and depression, or vice versa? Clinicians and healthcare professionals will obviously benefit from a greater understanding of the aetiology of depressive illness and how to treat it. But on an individual level, the answers to these questions have greater existential significance. Maybe this misery, frustration and shame, to which I am daily inoculated, has a specific cause? If I could just get a girlfriend, just lose my virginity; I could finally put an end to this chronic life-ache. After all, as Groucho Marx once asserted, “Behind every great man is a great woman.” But, if my failure with women is the result of this misery, frustration and shame, which in turn is part of a complex psychological problem, then I’m screwed (and not in the potentially curative sense of the term).

Perhaps, the two interact with each other in a vicious spiral: I’m depressed and so fail to attract a girl, which in turn makes me more depressed. Is there reason to think that this is the case? Does depression fester under conditions of involuntary virginity? The key word here is ‘involuntary.’ I reckon it’s possible that the process of persistently trying and failing to ‘cure’ one’s romantic isolation may exacerbate depressed mood.

Consider Martin Seligman’s famous experimental paradigm in animal psychology. Take three dogs. Attach one to a normal harness – the control dog. Attach another dog to a separate harness, but this time one which will administer electric shocks. Not very nice, I know, but this is science. Alas good news for this second dog, he may stop the electric shocks by pressing a lever and thus has some influence over his fate.

Now take a third dog and wire him up to the second dog. He’ll now suffer exactly the same shocks as the second dog. Give him a lever to press too; but depressing this lever does nothing, it will not stop the shocks. He lacks control over his fate. The shock is deemed ‘inescapable.’

Despite being submitted to the same frequency and intensity of electric shocks, the third dog will respond differently to the second dog. The third dog will eventually stop pressing the lever, becoming withdrawn and depressed. A dog cannibalised by the ‘black dog,’ if you will.

Next, the dogs are then transferred to a piece of apparatus called a shuttle-box, consisting of a floor, separated by a low-barrier. The floor on one side of the barrier is electrified, so the dogs must jump the barrier onto the safer, non-electrified side. The third, depressed dog, having learnt his prior lack of control and now accustomed to his helplessness, doesn’t even attempt to jump the barrier, instead whimpering and suffering further shock. 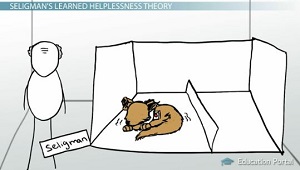 I wonder if prolonged, involuntary celibacy works in the same way? Buying fancy clothes, getting ripped at the gym, going online dating. If trying all these things still results in rejection and no romantic headway, is it any wonder people give up and perceive themselves to be helpless in the world of romance?